I have partnered with Logitech to review the Logitech Pen. This is a USI (universal stylus initiative) ACTIVE pen. This means it works MUCH BETTER than the “regular” styluses on Chromebooks. The Logitech Pen is designed for schools making it tough enough to handle the bumps, falls, and spills of being used by little hands. The comfortable silicone grip and triangular shape is sure to

Notice the comparison of trying to sketch chemical bonds on a Jamboard Jam. The Logitech Pen significantly improves the ability to add details to the diagram.

Learn More about the Logitech Pen

Google Jamboard is a creativity tool. It allows my students to go beyond the text to visualize their learning. I had purchased a bag of inexpensive styluses for my students to use with Google Jamboard. To be honest, the students rarely want to use them. They do not last that long. The fat foam tip is not much more accurate than just using your finger in Jamboard. Because they are so short they are not comfortable to hold in your hand.

The Logitech Pen on the other hand is delightful to hold.

The triangular shape and light weight make it perfect for students to use with Google Jamboard. I was instantly surprised by how natural the pen felt in my hand. I have never been impressed by a stylus, however, the Logitech Pen impressed me.

Using the Logitech Pen with Google Jamboard I am able to easily switch between writing my ideas on a Jam and manipulating text, shapes, and images. 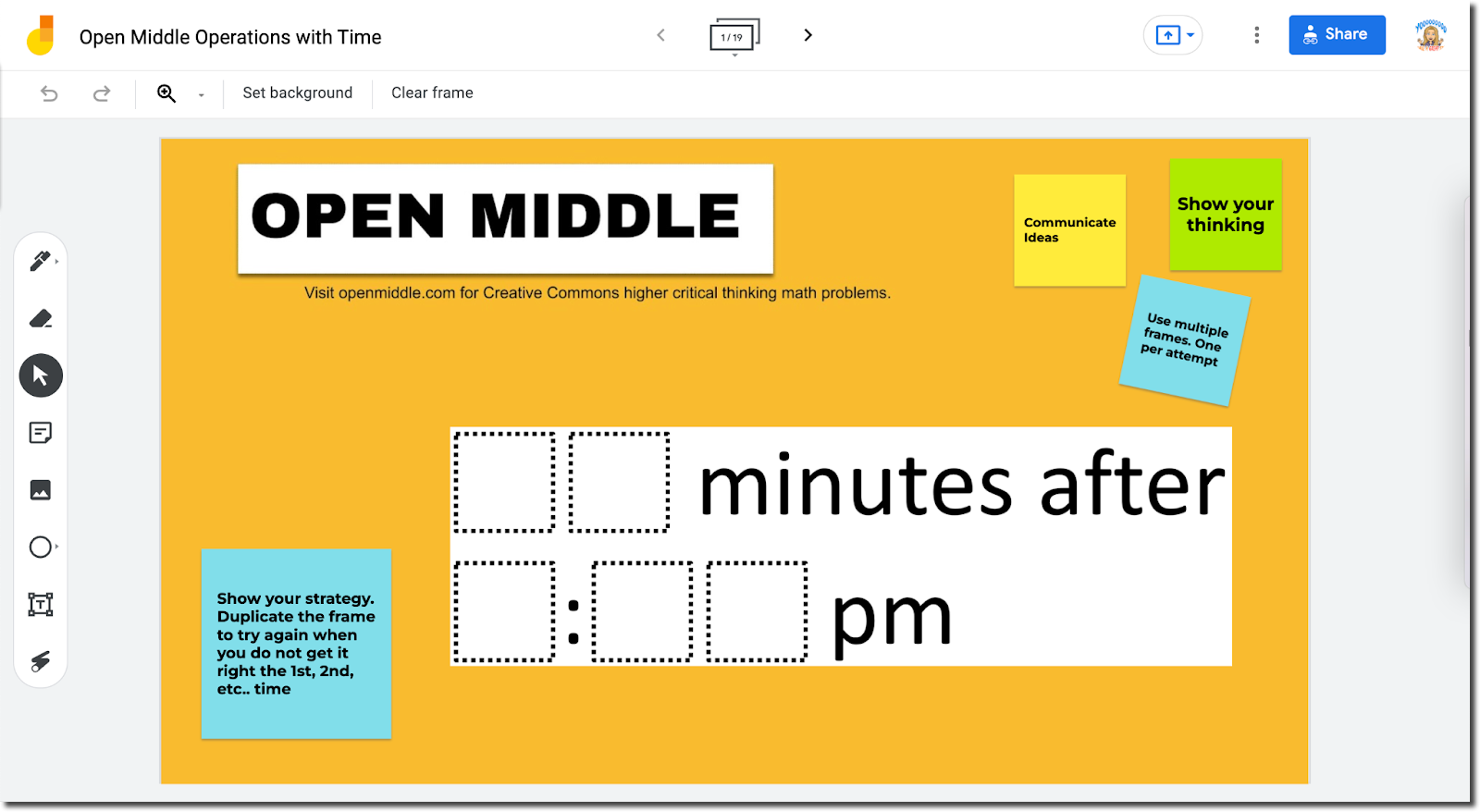 Critical Thinking is not about getting the answer the first time. Learning is messy and can not always be contained on a line to fill out. Jamboard aids students in critical thinking tasks by allowing them to use multiple frames to develop their ideas. To visualize their thinking. To collaborate and critique the reasoning of others.

One of my favorite resources for students to do higher critical thinking math problems is OpenMiddle. The problems are designed to require students to make an initial attempt and re-strategize. Google Jamboard pairs very nicely with OpenMiddle.

While I immediately enjoyed using the pen with my Jams on my Chromebook, I was surprised to see how easily my 9 year old took to using the Pen. I asked my son to strategize how to figure out how many minutes after an unknown time would result in 4:37pm. He has used my Chromebook and Jam many times for critical thinking tasks. I handed him the Logitech Pen with no instructions. Simply “Buddy, would you like to use this Chromebook pen?” He took to it as if he was using it his entire life.

My Son Works Out an OpenMiddle Problem

The template has draggable digits 0 to 9 ready to use with OpenMiddle problems. Students initially drag the numbers into the boxes to try to fit the pattern. The initial strategy is to try ANY numbers.

Students will then use the Logitech pen to switch from dragging to drawing.

I was surprised how my son, age 9, without prompting seamlessly used both the dragging and drawing features in Google Jamboard using the Logitech Pen. The pen gets out of the way and allows him to focus on the thinking required for the task.

As an Active Pen it does require charging. The good news, it charges with the same USB C charger as most Chromebooks. 30 seconds will provide 30 minutes of use for a student, allowing them to waste no class time.  On a full charge, the pen will last up to 15 days.

The Logitech Pen does NOT need to pair with the student device. Students can simply pick up the pen and start using it with their Chromebooks.

Paperless is Not a Pedagogy

I am no fan of replacing paper tasks with technology. Technology should ENHANCE the learning and allow for learning possibilities that are otherwise difficult or impossible. I am not a fan of students filling out a PDF worksheet. At best the learning is exactly the same and the teacher must read what was filled out on the line when teacher time can be used in better ways to make connections with students and provide meaningful feedback loops.

Consider for any digital, or non-digital, activity which of the 4 C’s are included?

Drawing and visualizing can be key components for creative tasks.

As with ANY tool, it is how you use it that creates the learning experience. Chromebooks can be used to bore students with uncreative tasks or can open up possibilities. The Logitech Pen helps to aid with students communicating ideas beyond writing a sentence or showing work on a math problem. DOK 3 is the 3rd level of critical thinking (out of 4 levels) and is defined by “Strategic Thinking.” The Logitech Pen helps students to think, brainstorm, restrategize, and then communicate their ideas.

Our youngest learners need to learn how to write with a pen. This can be challenging especially when we are remote with students. I have created 5 Google Jamboard templates for helping students to practice handwriting. Hands down the Logitech Pen should be considered for this task. The natural feel of the Pen in conjunction with the Chromebook is, in my opinion, the best way for young students to write when they need to use a Chromebook.

My Daughter Uses the Logitech Pen

My daughter came home with the best story about how the librarian had them do a date with a book. (I LOVE LIBRARIANS!!!) At first she had sour face explaining this story of the “weird thing at the library” but then ended the story with a peppy “But now I have 3 books that I like!” So I tried to get her to recreate the moment (it was gone). Notice how she is drawing on her Chromebook with the Logitech Pen. I was amazed at how my kids just picked it up and were using it so naturally with no help at all. They do not normally use a stylus and they love using it!

This post was sponsored by Logitech. I received the Pen in advance of its April 2022 release date and asked to provide my honest feedback. My honest opinion is that I truly enjoy using the Logitech Pen. It makes for a more enjoyable experience when I use Google Jamboard and other tasks on my Chromebook.