Home » Intermediate » The Presidential Election In Your Classroom, 3 Ways by @mathDenisNJ

The Presidential Election In Your Classroom, 3 Ways by @mathDenisNJ

The Presidential Election In Your Classroom, 3 Ways

If you’ve ever read any of my writing, you know I’m a big fan of cooking shows. I learn a lot and at the same time, learn what NOT to do in my own kitchen. In my book, Instant Relevance, Using Today’s Experiences to Teach Tomorrow’s Lessons, I mention how an episode of Chopped where a food was to be prepared Three Ways, connected to a third grade lesson I’d seen the day before, where the teacher asked her student to show three ways to arrive at the provided solution to a math problem. Well, there is not much more relevant to adults in our country right now than the Presidential Election, so here are three non-traditional ways you can bring it into your classroom.

Appetizers are not intended to fill you up, but to whet your appetite and prepare your palette for the main course. A short yet connected and meaningful way to use the current election was shown to me by a colleague, Oona Abrams (@Oonziela on twitter). The morning after the first Presidential Debate we were in the #BFC530 chat and she came up with this idea:

In a short moment, Oona had found how she was beginning her class that day. By using the text of the debates to create poems, she removed the negativity that can come from discussions among high school students regarding their underdeveloped political viewpoints, and turned the morning into an exercise in Spin Doctoring. She blogged about it here, so check out the results and try it out in your own classes too!

Some may argue that the found poetry lesson can totally be the main course of your class all by itself. I’d be hard pressed to disagree with you. Some appetizers you just can’t get enough of, like my grandmother’s cheesy crab spread squares, but since I’m a math guy, here’s a math lesson (it’s a bias, I get it…go ahead and judge me).

There is too much data out there for us to ignore it anymore. The hard part is that there’s so much that students may not know what to do with it all. Thankfully, media outlets and independent webbernetters are putting their analysis out there for us as well. In math, students may be able to do some basic analysis of the election data to foster discussion, but thanks to the New York Times math geek team, there are some incredible interactive maps of potential election outcomes available right now, and dynamically changing by the hour.

One of my favorites is this one, called “1,024 Ways Clinton or Trump Can Win The Election.” 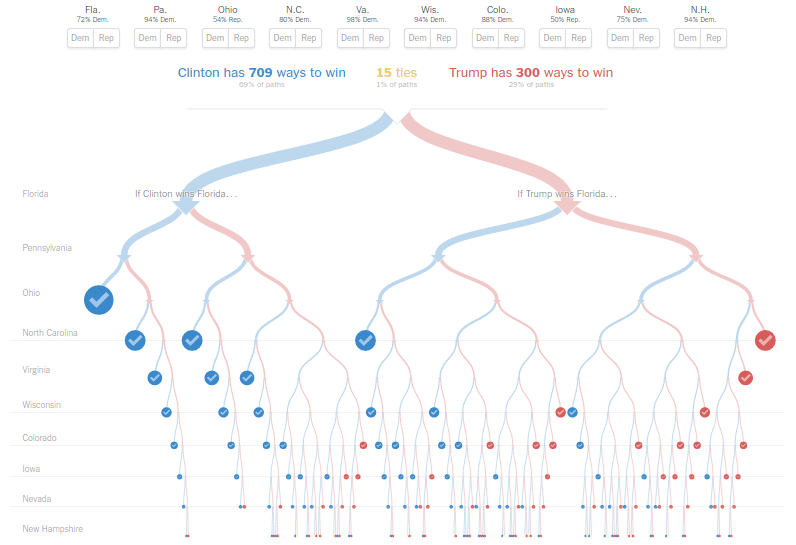 Students can spend a whole class period clicking on different scenarios of what will happen if one of the candidates unexpectedly wins a particular state, followed by what the other will have to win to recoup from that surprise loss. The probabilities change instantly and students can interact with the election projections in real time. Questions like, “at what point does the electoral vote from Nevada become relevant?” are excellent ways to engage students in discovering the possibility of the outcomes. Try it out and see.

Dessert is supposed to be fun. It’s supposed to be indulgent. It’s supposed to have chocolate. So bring some chocolate to class with you and have your students dive into the indulgent and fun world of satire and parody. Many of your students will have seen Saturday Night Live sketches of the debates or The Daily Show commentary on the election every…day. Some may follow less prominent YouTubers and have funny and interesting parodies to share. In fact, right after the third debate, Weird Al Yankovic came out with a parody video called Bad Hombres, Nasty Women, which includes autotuning the candidates and acting as the moderator himself. It’s fantastic and has over 5 million views in one week. 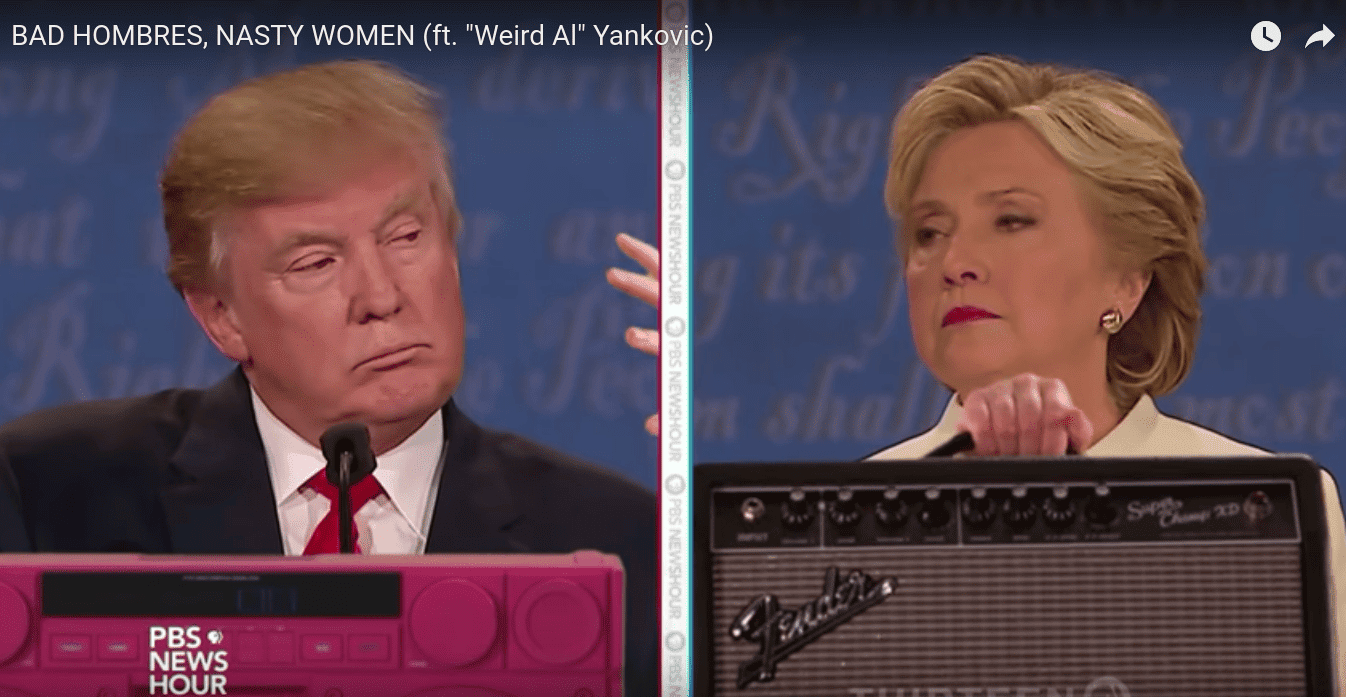 Don’t forget that our students are young, only a few of whom are old enough to actually vote, so despite our desire to offer them a serious academic environment in which they can cultivate their political beliefs, they should have the chance to laugh at a spectacle when they see one.

So take advantage of the plethora of opportunities to engage your students in this quadrennial national event, and make it Instantly Relevant, maybe even 3-Ways.

Denis Sheeran is the author of Instant Relevance, K-12 Math Supervisor in NJ, and host of the weekly twitter chat #MakeItReal, which meets every Wednesday from 9:30 – 10:00 pm EST. Connect with Denis on twitter @MathDenisNJ or at denissheeran.com. 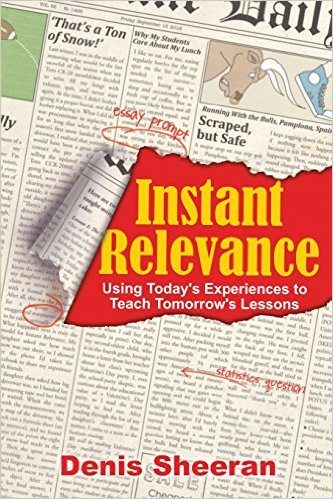