In my quest to be paperless, I ask my students to keep a digital portfolio where they post all of their work. The problem is how to capture work completed by students on the web or on tablets. I address this problem by asking students to take screenshots of the work they are doing and embed it into their digital portfolio.

For PC or Mac the snagit screen capture tool is hard to beat. It is not free however. After installing snagit on their computer students can capture part of the screen or the whole screen and then edit it by cropping, blurring, drawing arrows, placing text boxes and more.

Holding down command+shift+3 at the same time takes a whole screen screenshot. command+shift+4 does a partial screen. The mouse arrow is changed to cross hairs. Draw a rectangle around the portion of the screen you wish to screenshot. Screenshots are saved on the desktop, easy to locate.

Windows come with a program called snipping tool. Doing a search from the windows start icon will locate the program. To create a screenshot click on the “new” button and choose a “Rectangular Snip” to create a rectangle around the portion of the screen desired. 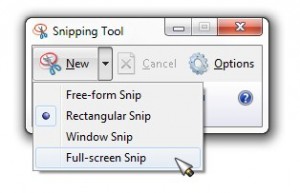 Using extensions in the chrome web browser allow students to capture portions of the browser screen.  One suggested extension is called “awesome screenshot,” which allows the student to do some basic annotation and arrows on the screenshot.

Press down the power button and the home button at the same time will allow for a screen shot to be made. The image goes to the iPad camera roll. Note that this can be tricky, avoid holding both buttons for a prolonged period of time.  This is a quick depression of the 2 buttons at the same time. It can also be tricky to depress both buttons simultaneously, you may accidentally press one before the other and be taken to the home screen.  Double clicking the home button activates your multi-tasking and can take you right back to where you were at so you can try again.

On an android tablet hold down the power button and the down volume button at the same time. Again, this can be tricky. Screenshot goes to the image gallery.

Similar to the Android tablet, the Microsoft Surface tablet allows for a screenshot by depressing the down volume and the windows icon at the same time.

Most tablets can download the skitch app which allows for annotating the screenshots.