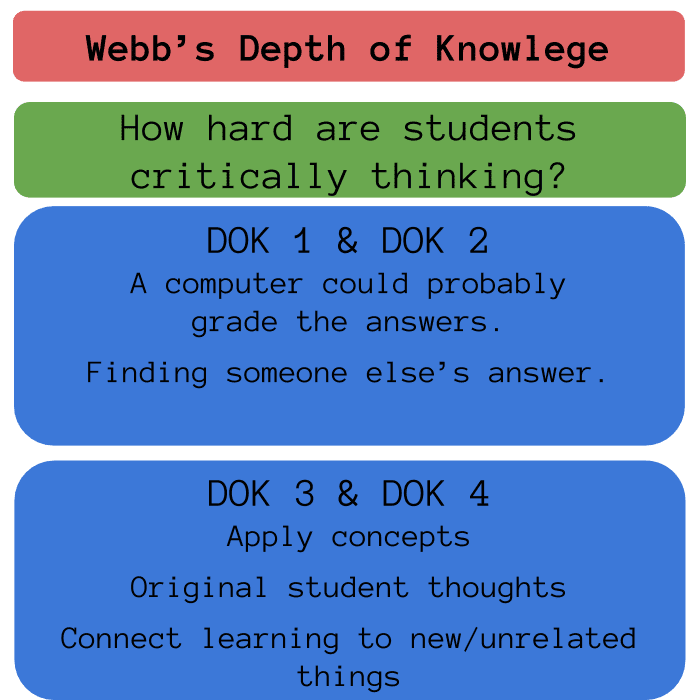 As we move to the Common Core there is a greater focus on Webb’s Depth of Knowledge (DOK) levels. The Common Core asks students to engage in higher levels of critical thinking, to research, cite and support their positions. Identifying the DOK level of tasks can be challenging. It can be easy to mistake “difficult” work for being a higher level of DOK. As a math teacher I gave my students a lot of difficult problems, however these problems were still only DOK level 2. The students were using the algorithm or steps that I gave them to solve the math problems. If students are following steps the task is most likely a DOK level 2.

I was able to take almost all of the district math curriculum and type it up into a question bank. I used the website http://www.quia.com/web to create games (playsheets) and quizzes out of the bookwork, quizzes and tests. The advantages to doing this are numerous. I was able to stop grading things and use that time instead to work with students who struggled and to engage in deeper critical thinking conversations with students. For the students, the immediate feedback that they received after each problem increased their motivation. The students also did not practice doing math problems wrong. If they did one problem incorrectly they immediately knew it. If they got a second problem incorrect they would ask for help before doing a 3rd problem incorrectly.

The fact that the computer was able to grade almost all of my curriculum was a signal that I was hardly ever going beyond DOK level 2 in my classes. Rarely did the district curriculum ask students to explain their thought process, justify their reasoning, research and support conclusions, extend their thinking, or apply to an original situation.

“Explain the cause and effect of a historical event” is DOK level 2. This task does not ask students to think critically, but rather to identify facts that someone else has identified. An indicator that a task is DOK level 2 is if it is expected that all students will have relatively the same answer. If there is an answer key that student work can be checked against, the task is likely DOK 2.

For a task to be DOK level 3 the students need to be engaged in strategic thinking. Students should be supporting their positions with information from the text or from their research on the topic. DOK level 3 goes beyond providing an answer, students would justify and explain their answer. The task of finding the answer may be challenging for students; however, the task being challenging does not elevate it to DOK 3 unless the student is going beyond reporting information. The end product for each student would potentially be different.

A common misconception is that there is one way to solve a math problem. Oftentimes math classes focused on one algorithm for solving the math problem. This leads some students to feel that there is one way to solve the problem. This procedural thinking is what makes most math problems students are asked to do simply DOK level 2. Asking students to explain why the procedures lead to the math solution can elevate this task to DOK level 3. Asking students to think of alternative ways to derive the same answer requires the student to engage in critical thinking skills and thus increases the DOK level to a 3. 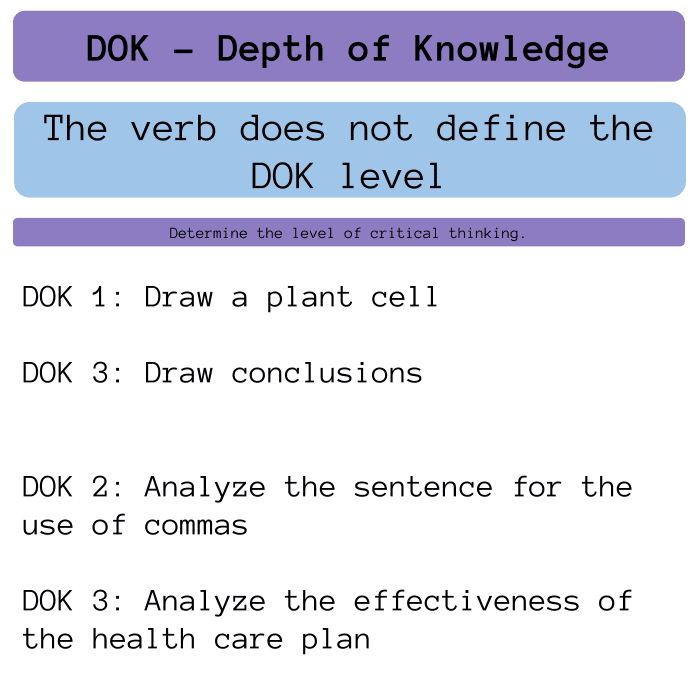 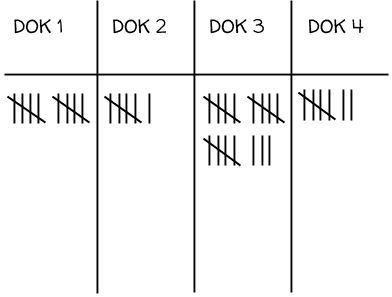