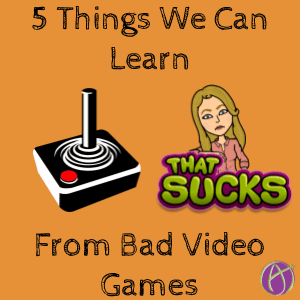 What Can We Learn from Games

Games are educational, even if what we are learning is how to play the game. The problem is that, like lesson planning, designing a good game is hard. I like to have a few games on my phone that I can play when I’m waiting around for something… like to pick my kids up from activities, ha! This week I installed several games on my phone that had good looking graphics but ultimately the underlying game design needed improvement, and I uninstalled the games. There are many lessons we can learn from bad video games and think about how not to replicate these in our lesson designs.

Previously I had blogged on 5 Things Teachers Can Learn from Video Games. I would like to build on this list with some other things we can learn from games. 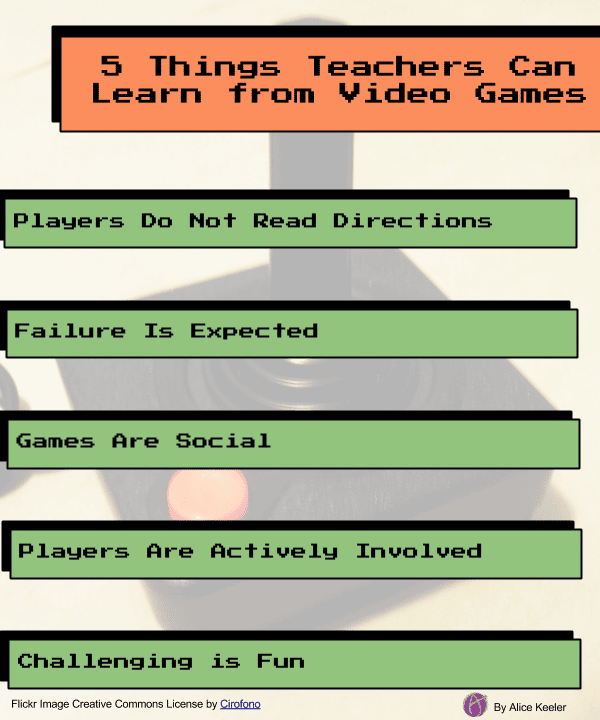 5 Things We Can Learn from Bad Games

While the games I downloaded clearly had spent significant time on making cool looking graphics that wasn’t enough to make the game good. As teachers, we can fall into this trap. We can use a cool looking digital tool, but the learning is low, and the engagement doesn’t last. We can not rely on shiny things to engage students. “Students will like it because it is digital” is a myth. Nothing substitutes solid lesson design and careful consideration for what makes for good learning and student engagement.

2. Avoid Too Much Tutorial

At least a couple of the games I was playing it was pretty obvious how to play, yet it forced me to do the tutorials anyway. It feels good to figure things out. As stated in my previous blog post, challenging is fun. The trick is to provide a challenge that is a challenge but within the student’s reach. Provide some directions but also allow for an element of “figure it out.” In the 5 E’s lesson plan model explain comes 3rd. Engage, Explore, Explain, Extend, Evaluate. Before explaining to students how to do something, engage them and let them explore. Then when you do explain they really really want you to explain it because they couldn’t figure it out.

Particularly when learning how to use a new technology, before showing students anything, see what they can figure out. See what, if anything, you need to show them after they have tried to show you something.

Some of the stuff the game was asking me to do was just dumb. It was repetitive and I didn’t feel like I was being challenged. Each level was pretty much the same thing as the previous level. I was wondering “why do I need to do this?” Yes, it was a requirement to pass the level but it decreased my enjoyment of the game. Just because it was in a game didn’t make it less dumb. Do the students see the purpose in all the aspects of the activity? Sometimes we add superfluous elements to a class activity to “make it fun” but really it’s not enhancing the learning and it’s just a dumb thing to do to have something to do. I’m definitely guilty of this.

Is Kleenex an in app purchase?

This got me to thinking that extra credit was like an in app purchase. The learning experience is cheated when students think of school as a game of collecting points rather than their hard work and skill leading to their success. As with in app purchases, extra credit can lead to unfair opportunities. If I don’t have the money (or willingness to spend money) on diamonds in the app I can not be as successful at the game as players who do. In fact, if I was willing to spend $10 I could have gotten enough diamonds to upgrade all the equipment in the game and made it really easy to pass the level. It’s not unusual for extra credit opportunities to benefit students who are advantaged with money or parental time.

Beyond getting a high score, how are my efforts in one area needed for another? In one game I needed to farm things in order to have enough food to mine things. I needed the mining, and crops, to add to workers and other elements in my village. I had a clear goal of what I was going to be able to get once I accomplished a task. Then the game ran out of goals. Nothing else to buy. I could keep playing the game to get more coins but why… Another game I was moving along the path to level up, but it was not building goals for me to pass. Boring. When I play World of Warcraft there is an element that lets me set my own goals not just collect points or coins.

Looking at research by Stanford professor Carol Dweck, short-term goal setting can be really powerful for learning. Have students set goals. This is not “I want a B.” A goal is measurable with specific actions to obtain. “By Friday, I will be able to write 3 sentences by using active voice instead of passive voice. I will do this by writing 3 sentences each day and submitting for feedback.”