This morning Kristin Gregory tweeted out that she was trying my “Tweet Stuff” template. In response to some requests, I thought I would make some directions on how to use it.

The gist of the spreadsheet is it creates a link for you to tweet out things. Click on the link and it launches a tweet. The are several reasons you may want to do this.

Those are just a few reasons, share your ideas in the comments!

Make a copy of the template.

Each line creates ONE tweet. In columns C, D, E and F you can write what you want in the tweet. These 4 cells will be merged together, so the total number of characters in all 4 cells can not exceed 140 characters.

It is unlikely you need to write anything into columns D, E or F, but the option is there if you are listing things out.

Do NOT include the @ symbol. This is automatically added for you.

You can have up to 6 people mentioned in the tweet. Type their twitter handles, one into each cell, in columns G, H, I, J, K, and L.

Hashtags are a way to tag or label the tweet. If you’re tweeting about math try using the #mathed or #mathchat hashtag. If you want to find California educators try #CAedchat. Here is a list of educational hashtags: Click Here

Column M and N allow you to enter up to 2 hashtags.

Do NOT include the # symbol, this will be automatically added for you. 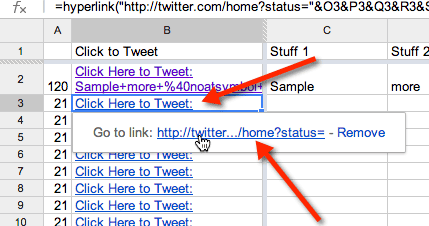 The spreadsheet is in editing mode, optionally you can publish a Google document and you would only have to click on the link once if you were in the published view.

Ideas Shared With Me 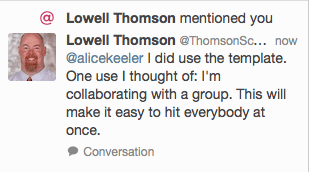 “I’m collaborating with a group. This will make it easy to hit everybody at once.”