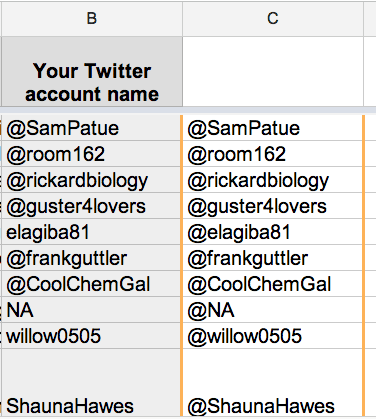 Twitter is a powerful tool for Professional Development. Asking educators for their Twitter handle is a great way to connect with educators you are working with. Several teachers also use Twitter with their students, it would be helpful to have a list of student names and Twitter handles in order to connect and communicate with them.

The problem with asking for Twitter handles in a Google Form is that participants are not sure if they should include the @ symbol or not. Depending on what I need to do with it, I may want it  either way.

From the screenshot above you can see that some participants included the @ and some did not. In this case I DID need the @ symbol. So I wrote a formula in the spreadsheet to check for the @ and add it if it was not already there.

In a blank column you will want to use the =if function
=if(condition,true,false)

The =left function selects characters from the left hand side of the text string. (Note, in other circumstances you may want to use =right.)

=left(B2,1) will return the left most character. I want to test if that is the @ symbol.

Type =if(
Then add the check for the left character left(cell,1)=”@”
Notice the @ symbol is in quotation marks, as all text strings need to be.

Type a comma. If the left character is the @ symbol we want it to return the entire Twitter handle the user typed in. Type the location of the cell with the Twitter handle.

If you have the opposite issue where the cells contain the @ symbol but you do not want them to write this formula instead.

The =split function will break up the text anywhere it sees the @ symbol. It also will “eat” the @ symbol, so this is a nice tool for stripping off the character. 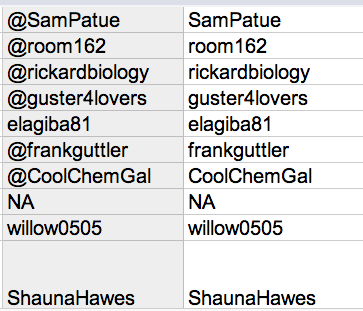